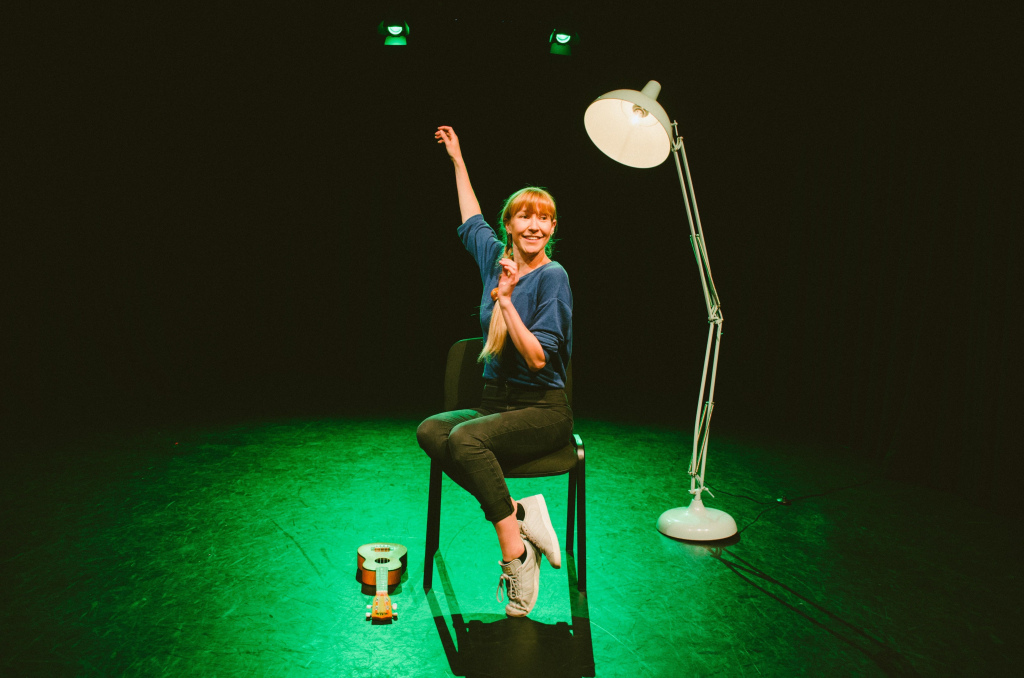 Sexy Lamp is a first-hand insight into Katie’s experience as a young actress arriving in London, dreaming of a city full of optimism and aspirations. Instead, she is greeted by a brutal industry where named, speaking and fully clothed roles are hard to come by.

Live streaming from Wolverhampton’s Arena Theatre, this multi-award-winning production is a semi-autobiographical piece featuring original songs. A story of power, prejudice and the fight to keep dreams alive, Sexy Lamp is a comical yet powerful call to arms which demands women are seen and heard in all walks of life.

Ahead of the stream we’ve been able to chat with Katie about her inspirations behind the piece and why she’s excited to perform to digital audiences for the first time.

For those who may be unfamiliar with your work, could you tell us a little about yourself?Hello. I am a writer and performer originally from the West Midlands. In my work I use comedy and my ukulele to tell semi-autobiographical stories that focus on humans who are also women. In lockdown I was shortlisted for the Evening Standard Future of Theatre Award and learnt how to make banana bread so, yeah, it’s been a year.

I have to say this production sounds incredible!Where did the inspiration for Sexy Lamp initially come from?That’s very kind, thank you. The show’s title comes from the Sexy Lamp Test created by Kelly-Sue DeConnick. She says if in the scene you are watching “you can replace the female character with a sexy lamp and the plot still functions, it fails”. I thought this was a brilliant starting point to explore and challenge how women are so often over-looked and under-valued in art and in life, which is what the show does.

The show is set to make its digital premiere on 23rd of April. How are you feeling about performing to a digital audience for the first time?As a West Midlands artist I am thrilled to be performing at the Arena Theatre in Wolverhampton and delighted that this live stream offers an opportunity for audiences all over the world to see some live theatre, and hopefully feel connected to others watching the show, wherever they are. I hope this show brings a bit of joy and offers a sense of community to those watching, which I have greatly missed this past year. I am over the moon to have been given this opportunity to perform in front of a live audience digital audience because so far, the plants in my room have been really unresponsive.

With theatres still sitting dark, producers and content creators have had to find new and innovative ways to keep audiences at home engaged with the arts. Why do you think it is so important for the artistic world to explore new ways of reaching their usual audiences during our various lockdowns?The arts have always been incredibly important but I think now more than ever people are looking to feel connected and a part of a community. It’s not just the ‘usual audiences’ either – one of the more positive things to come out of the theatres going dark is that it has made access to shows more possible for more people. Theatres are not safe or pleasurable environments for everyone, and more steps need to be taken to change this as they start to open. Theatre often explores what makes us human and being inclusive has to be a priority for venues going forward. It is so exciting to be able to offer the show with BSL interpretation, captioning and audio description. It is the first time we’ve had all three options.

The show tackles the incredibly important and prominent issue of sexism within the acting industry.

It’s so frustrating to see the glass ceiling still resting over so many female heads, but more and more women are thankfully speaking up and challenging the “limitations” set upon them. Are there any particular comments or rejections which help to keep you motivated along your journey?The reason I started writing my own work is because I felt the few acting jobs I managed to get did not represent the complexities and brilliance of women. I have also been in a number of situations where I felt vulnerable, scared and have been taken advantage of, both professionally and personally. I am motivated to add my voice to the many fighting for equality, equity and respect in a too often unequal world and industry. I am fuelled by the injustice I see in the arts and the world.

What message would you give to an actress who’s looking for a little advice as she finds her feet in a daunting industry?I would tell them that their happiness and safety is more important than any job, that no one has the right to push you into doing something that you don’t want to do and that saying “no” is often the most powerful tool you have. And that you are not alone. Reach out to the creatives that inspire you and create your own network of likeminded people. And I would tell them that there is enough space in the arts for the artist they want to be. And then I would apologise for the lecture

I know from personal experience it can be hard to fight for change when many of our peers cannot even see a cause. What small steps can we all take to help in levelling the playing field for females in the industry?We have to believe women and believe in women. We have to recognise our own power as an audience and as an industry, and we have to do more to empower and support women. We have to support the careers of artists we believe in by trusting them to lead, sell tickets, tell stories and change the face of theatre. We have to be paid equally, we have to see change from the top to the bottom of the industry and we must fight to dismantle the patriarchy at every turn. For the record, trans women are women, and all of this is intersectional. There’s no equity / equality for women without also addressing racist, classist and ableist industry practices.

We know the arts industry still have so far to go in terms of closing the gender gap, but creators like you are leading the way towards a truly positive change. Every time a woman stands up and makes her voice heard, we take a step forward so I would really like to say thank you.

I know there’s probably so many, but what are your main hopes for the future of female performers in the arts industry?That’s very kind of you, thank you. There are so many female creatives and allies making it possible to take vital steps forward and elevate the voices of women but there is still so much to do. I hope that in the future doors will open more freely for women, that the arts industry starts to reflect the diversity in society. I want to see a real change for female creatives at all levels

I just want to say a huge thank you to Katie for her time, and for using her story in such a positive manner. Sexy Lamp will make its digital premier on Friday 23rd April at 19:30. It will then be available to watch on demand between Saturday 1st May and Wednesday 5th May.For more information or to book your tickets click here or head to Katie’s website.

Images courtesy of Jason Drake
This interview was originally published on Centre Stage.