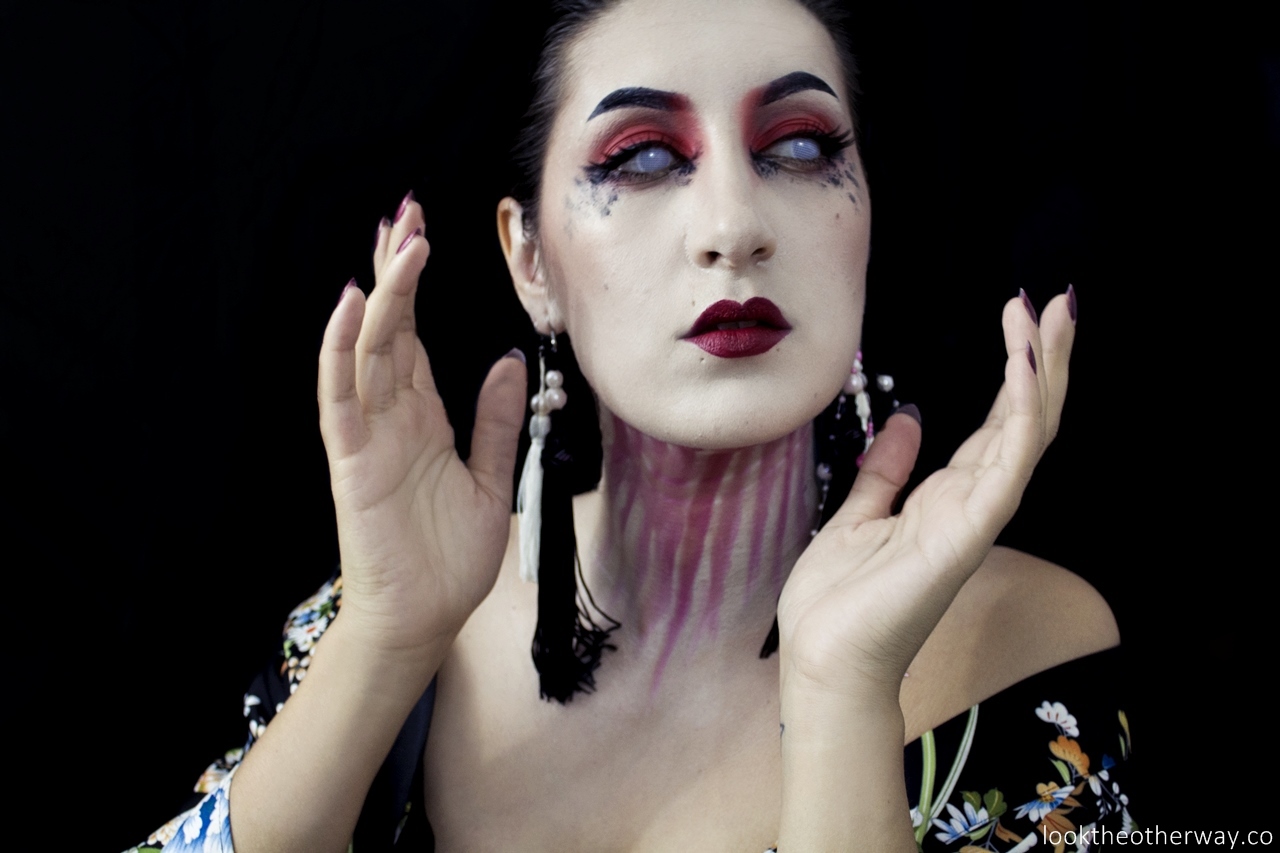 Halloween is just around the corner, which means I am the most happy creature around! It’s the time of the year when you don’t have to justify looking dead, and that counts as awesome in my book! Here’s my easy guide to look like you just woke up in Kyoto… Or didn’t wake up!

I’ve always been fascinated with Japanese horror movies. That’s because the ghosts there as portrayed by long-haired, seductive females. A geisha was the obvious choice for me this Halloween, since she is indeed a seductive creature.

So if you want to appear as a mysterious geisha for the upcoming Halloween party, here’s what you have to do:

Get any paper glue stick in order to cover up half your eyebrows. Since I have almost non-existing brows, it only took me one coat of glue. If you have bushy brows, apply one layer, let it dry, and then continue by applying as many as needed. Once done, dust some translucent loose powder on the area, to reduce stickiness. In order to completely cover up the brow, take some concealer that is a bit of a more orange tone and apply generously on the area. The concealer I used is Maybelline’s The Eraser concealer in shade “Nude”.

Prime your face for what’s to come! I needed a good pore-filler for the heavy duty foundation job, so I chose NYX’s Photo-loving Primer. I used the same concealer for the eyes and nose areas. For foundation, I chose my all-time favorite, Lancome’s Miracle Air De Teint Foundation. It’s not too heavy, so it will permit you build up until you get to the creamy white foundation. The creamy white foundation is just your regular Halloween store one (similar here), due to the fact that I had no other option available at home. I used translucent loose powder to set everything in place.

For the eyebrows, I wanted to play a bit with eyeliner. Since I was gonna use tons of eyeliner, I didn’t want to use my regular Lancome one, so I went and bought Essence’s Liquid Ink Eyeliner (similar here). For its price, it’s a great liquid liner and I highly recommend it for everyday use as well! I used it to shape the brow and fill it up until the middle. For the rest of the brow, I used this gorgeous red colored eye shadow I found at Melkior, called “Kiss Me” (similar here).

Moving on the the most important step, the eyes! I prepped my eyelid by using NYX’s HD Eye Shadow Base. Then, I went in with Melkior’s eye shadow all over the lid, blending everything as I went. I build it up until the brow in the inner corner of the eye, making a connection to the red of the eyebrow. Using the same brush, I also contoured my nose. By using the same Essence eyeliner, I made a regular cat eye, but decided to extend the inner corner a bit more, by making irregular and odd shapes and dots. In the outer corner, I applied some dots but since I wanted it a bit more messy, I ripped out a piece of makeup sponge and dabbed it in eyeliner. With that I just went ahead and dabbed until the cheekbone. The final step is adding some mascara, mine was Deborah Milano’s Love My Lashes Volume Mascara (similar here). If you want you can also add some fake eyelashes. I added some just in the outer corners.

I used the same eye-shadow for the cheeks, as blush. For lips I used my recent obsession, Lancome’s L’absolu Rouge in shade 397 “Berry Noir”. For the neck area, I got inspired by The Gazette’s Ruki neck makeup, so I used Essence’s Lipliner in shade 14 “Femme Fatale” (similar here) to draw them, and a brush to make them a bit more messier. If you want to, you can also extend the white foundation on your chest and shoulders.

Of course this look could not be as scary as I wanted to without the amazing mesh Sclera-Lenses! And since it’s Halloween soon, I decided to give you the opportunity to get some crazy lenses for yourself! Just use the coupon code “ellone” to get 10% off your purchase upon check-out! 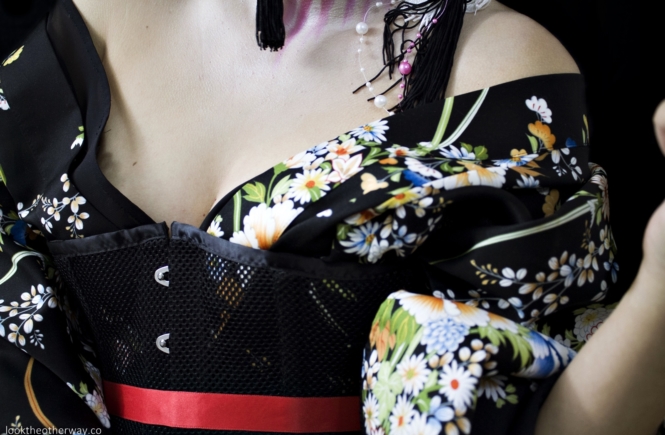 For my outfit, I used a vintage kimono I cherish and the amazing mesh cincher from True-Corset. The earrings were made by me.

The tutorial is also on my YouTube channel now, so take a look if it makes it easier to follow the steps!