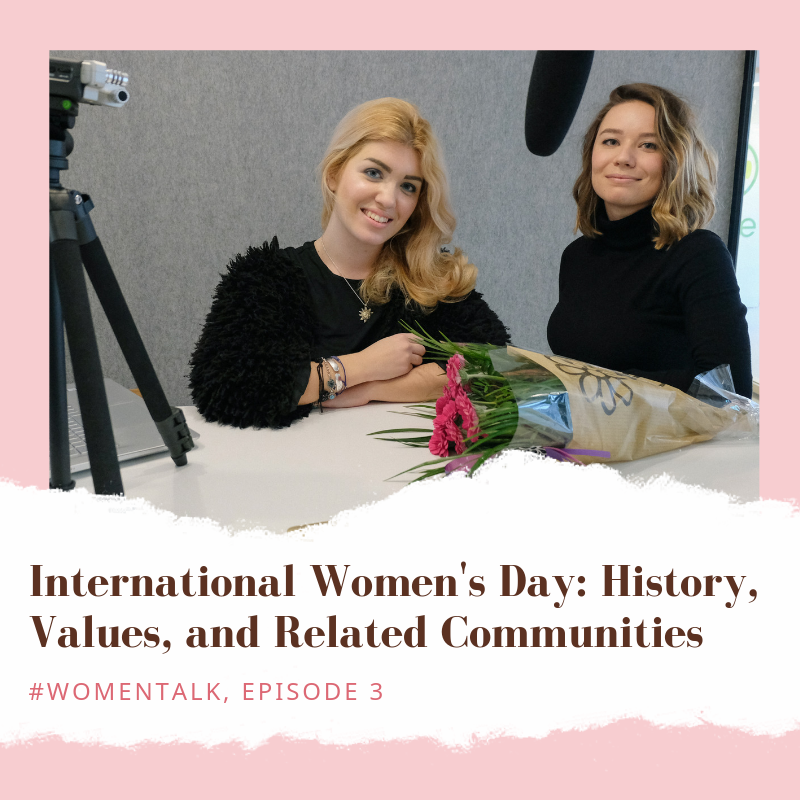 Listen to the full podcast here:

Communities & Apps mentioned in the podcast:

• Ladiesgetpaid.com - tools, resources, and community to help women negotiate for equal pay, and power in the workplace.

Julia: [00:00:01] Hello everyone and welcome to the Fashion Potluck podcast sessions.

Julia: [00:00:21] Hello. International Women's Day, as we know it means different things to different people. But the global focus on equality and celebration is clear. International Women's Day first emerged from the activities of labor movements at the turn of the 20th century in North America and across Europe. It helped to support women's rights and participation in the political and economic areas. To many people International Women's Day is not meaningful, it's unimportant and probably many people don't even know about it. And today me and Una, we want to talk about the day, its history, some facts about women and how is it in general to be a woman and what are the supportive factors in our environment. There are and values that guide International Women's Day. And these are very important words: justice, dignity, hope, equality, collaboration, tenacity, appreciation, respect, empathy, and forgiveness. And to be honest, while reading this I'm really proud to be a woman. I think these are very important values and I hope that all women, and not only women actually, but all humans can also incorporate this into their views and lives.

Una: [00:01:55] Yeah definitely. And I'm actually really proud to be a woman as well and to actually live in an age where we can see an actual improvement in fields related to women. So, when did International Women's Day start? So it has been observed since the early 20th century which was actually a time of great expansion and turbulence in the industrialized world. And it really saw a booming population growth and a rise of radical ideologies.

Una: [00:02:25] One of the years which is very important is 1908. And that's actually when great unrest and critical debate was occurring amongst women. And in 1908, 15000 women marched through New York City demanding shorter hours better pay and voting rights. And that's kind of really was the first step when women decided "we must start changing something". The year after that in 1909 the first National Women's Day was observed in the United States on the 28th of February. It was actually the Socialist Party of America which designed to stay in honor of the garment workers strike in Europe. Actually the previous year, where women protested against working conditions. And then, throughout a whole year, different things were happening but actually a year later in Copenhagen de Socialist International Party established the Women's Day, international in character, to honor the movement for women's rights and really to build support for achieving universal suffrage for women. So you can really see how it expanded worldwide from America to Europe.

Una: [00:03:41] And it was actually on March 19th in 1911 that International Women's Day was observed for the first time in Germany, Austria, Denmark, and Switzerland so it truly started expanding. And what's really interesting is that over one million both men and women participated in rallies and demand for the right to vote, to hold public office, women's rights to work, and to vocational training and to end discrimination on the job. So we can really see that men were also in a way supporting this to a certain extent.

Una: [00:04:18] And it wasn't really Europe but at one point Russia was really involved as well. And as an integral part of the peace movement during World War I won women in Russia observed their first International Women's Day on February 1913. So, in Europe during the 8th of March 1914 actually, it was women who held protest rallies for the war and to express solidarity. And again three years after Russian women protested and called a strike for "bread and peace". A really important date on the last Sunday in February which actually fell on the 8th of March according to Gregorian calendar.

Una: [00:05:00] Yeah definitely, but you have to keep in mind that this is when the movement started. But it wasn't only until late 1975. United Nations started observing the Women's Day on March the 8th. So, it really took years and years. But here we are. And in many countries, it's definitely observed as an important date.

Una: [00:05:35] Officially. It depends from country to country because in some countries it's an official holiday so women do not work. But still in most cases is just a holiday and it really depends on how it's celebrated, because in developing country it's I believe more celebrated, more fought for.

Una: [00:05:57] In my country actually it's always so we sometimes combine it with Mother's Day but we always actually give gifts to our mothers and our grandmothers. Flowers usually, chocolates, or little cards when you were younger. So it is really celebrated. It's not a public holiday, so you still have to work even though there is some debate actually to make it a public holiday.

Julia: [00:06:20] Okay. And just because probably our listeners don't know, we were talking about Croatia. And I think, to be honest, to compliment this, in many eastern European countries it is very similar. I don't think it is a public holiday yet, even though women would like to have it of course and yes presents are very important, compared to now we are in the Netherlands and I've been here for several years and I did not notice a lot of, you know, presents or a lot of celebration, compared to Eastern Europe. And as you mentioned, yes, I can see now that the 8th of March is actually an official holiday for around 28t countries in the world, including actually quite curious Afghanistan, Cambodia, Cuba, Vietnam and many are others. That's very nice to see.

Una: [00:07:23] Definitely. I think we should all look up to it and try to celebrate it and also just give something nice as a present for our close family members and friends, right.

Julia: [00:07:35] Yeah I agree. Definitely, I would encourage all our listeners to at least send a nice warm message to your mother and your grandmother maybe and to your close friends. But talking a little bit about women's rights just to touch upon a little bit the women's topic...

Listen to the full podcast in the player above.

If you have any questions, feedback, or suggestions regarding our podcasts, email us at inspire@fashionpotluck.com.

*Disclaimer: The purpose of this podcast is to educate and to inform. It is no substitute for professional care by a doctor or other qualified professional. Statements made by Fashion Potluck's guests and speakers do not reflect Fashion Potluck's views, and are shared as personal opinions of interviewed individuals.