5 Signs they are a Toxic ‘friend’ 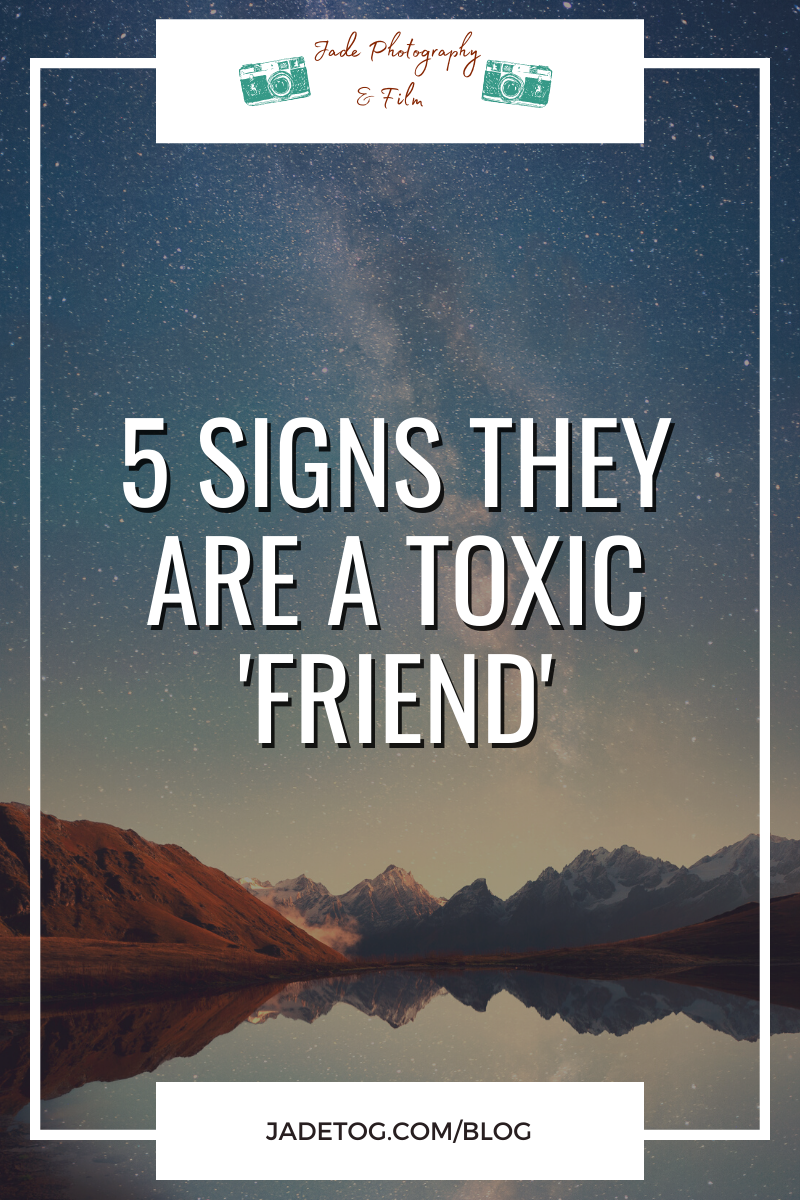 We all like to think our friends have our best interest at heart, don't we? That they are going to be a shoulder to cry on when we need them. Sadly, there are people out there that will show themselves to be a kind person, a caring friend, but won't hesitate to 'throw you under the bus' so to speak. What's worse is when this is meant to be a friend who you had been calling your best friend.

As someone who has had a toxic person very recently be blacklisted from my life, I wanted to shed some signs that someone you know might actually be a toxic friend.

1. They only care about their own problems.

Whilst I don't ever suggest making someone else's problems your responsibility, I do make sure that if a friend of mine is feeling low and needs support then I will be there for them. Toxic friends won't do that. They will hear you have a problem and instead of supporting you, they will instantly turn it into being a discussion about them. It's like your problems don't even register in their mind. I have recently been hella depressed, and I have tried confiding in a particular friend about this, but whenever I did this it was like talking to a blank wall. Nothing was going in, and when they said anything, it was to talk about how they were feeling depressed too. If your friend can't support you without turning the conversation to be all about them, they don't deserve your time and effort and you should look for support elsewhere.

2. They will take at every opportunity, but not give back.

I had a friend who I invited to every event I was going to, because I thought she needed to get out and meet new people. She would then turn around and not involve me in events. She also used me to get closer to my housemate who she had feelings for. I pushed her forward to opportunities in modelling and acting, because I thought she would enjoy these things, but not once can I think of an opportunity that she has brought to me. Of course, friendships aren't all about this kind of exchange, but if you find yourself trying to put this friend in a good position and they aren't reciprocating that effort, you need to question just what they are going to put into this friendship.  Because one day they will not be there when you need them the most, like I had happen recently. This person would rather spend an evening with the housemate mentioned in this point, than see a friend who was calling out for help.

3. They will cancel every single plan you try to make, because it isn't something they are in control of.

As an introvert, I understand when people cancel plans last minute. I've had my fair share of cancelling plans last minute, so I won't even pretend I am a saint with this. But if a 'friend' is only seeing you when it suits them, BIG RED FLAG!! Maintaining a friendship is a two way street. You shouldn't be the only person arranging plans. And when they DO arrange something, make sure it is suitable for you too! Don't agree just because they have finally arranged something. They are only arranging something because it is beneficial for THEM! And you are better than that. You don't deserve to be someone's backup option.

4. They will go behind your back and do things that WILL upset you.

If you have seen my last blog post, you will see I have recently gone through a breakup which hurt me greatly. What did this so-called friend do to console me? Go for lunch with my ex. Without telling me. I found out from my ex. And when I messaged this person "If you're only pretending to be my friend, please be outright about it" and their response was to claim they are depressed, they "can't keep having this conversation with you" and said anything to make them be the victim of the situation. Toxic people will do things that will upset you. And the worst part, is they don't even see they are in the wrong. Instead, they will gaslight you, and make out that YOU are the villain.

5. They will trigger your bad mental health without a second thought, but will push you away the minute you trigger theirs.

This is a big one for me. I have a history of self harm, and when I am depressed the demons do come back in the depths of my mind. This 'friend' also suffers from poor mental health, as you can probably guess. There would be times they would be at my house, a fresh new cut on their skin, and I would look at it feeling hella triggered if I was having a bad mental health day. But, being a good friend, I did what I could to make them feel comfortable. I would be there for them, be a shoulder for them to cry on and tell them how important they are to the world. But at the same time, if I ever went to this person and told them of my demons in my mind, they literally pushed me away and told me they couldn't handle my negative emotions because they were triggering theirs.

I have had a horrible experience with fake friends over the years. And every time it hurts. It doesn't get easier. So this is why I wanted to write this out so hopefully someone else can see the warning signs and stop themselves investing in people who don't deserve your time and love.