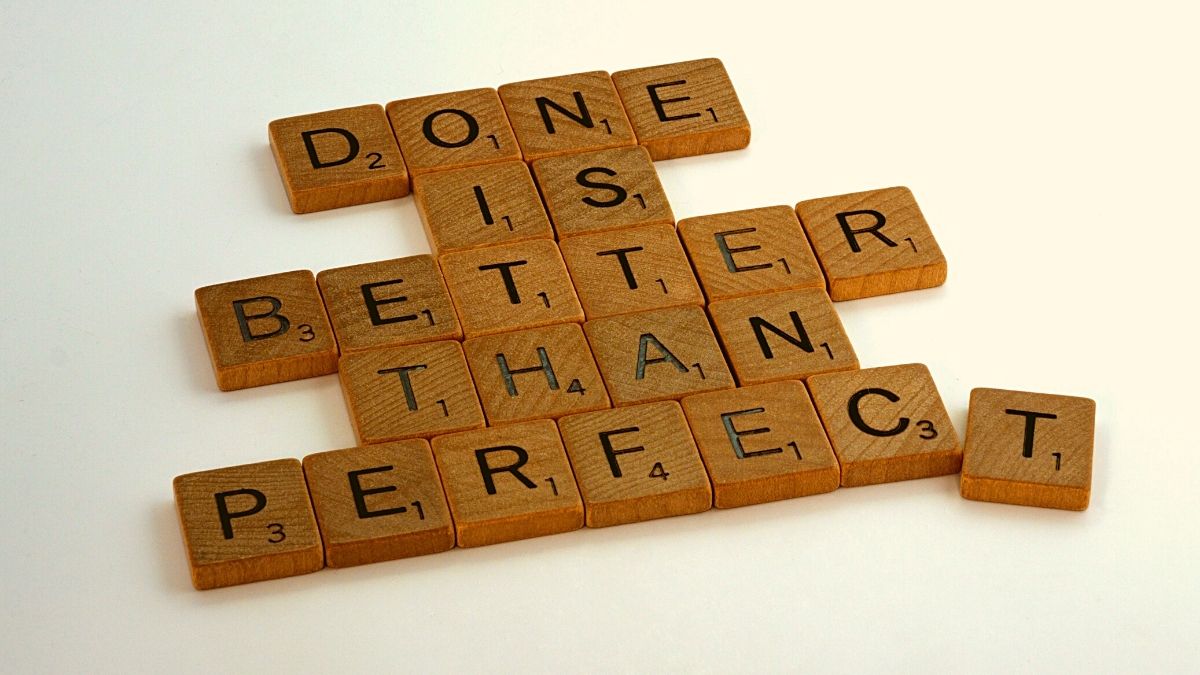 There’s something comforting about accepting mediocrity. Or at least, being accepting of less-than-perfection.

Perfectionism is always something that I’ve struggled with. I can still remember sitting on a bench with my Spanish teacher while studying abroad in Spain, struggling to eloquently convey my thoughts in Spanish.

“I can see the wheels turning in your head, trying to come up with the perfect thing to say. Sometimes, you just have to let yourself make the mistakes so you can learn.”

This sounds like a good idea, for sure, but it’s not so easy in practice.

In fact, similar advice has followed me throughout my life. It came up a few years ago when the only negative part of my employee review was that my manager said I needed to “take a damn risk every once in a while.” I needed to start making decisions on my own without consulting him on everything, but in order to do that, I needed to have confidence in my work and not be so worried about making mistakes.

This critique, as cited in my Thought Catalog piece, is one of the main catalysts that forced me to start reevaluating my confidence. A person who had once been almost cocky had become as timid as a mouse. How did that happen, and how could I get it back? I started actively working to gain back at least some of the confidence I had lost throughout the years.

But as most people probably know, you can’t just declare confidence like Michael Scott declares bankruptcy. And, as anyone who has ever suffered from Impostor Syndrome can attest, simply trying to become perfect at something doesn’t really help with confidence because you just begin to spiral as you realize that you can never be perfect. Plus, studies have shown that the better you are at something, the less confident you actually feel in your ability to do that thing.

Just call me Dunning. Or Kruger. Whichever one was wittier and had a penchant for crop tops.

When I started working from home back in March 2020 and had my managers less easily available to me, I took my manager’s advice more seriously. Owning the fact that I know how to do my job and that if I do take a guess at how to do something, it’s probably the right guess. It’s okay to try and only get it 98% right, what’s important is that I’m doing my job to the best of my ability using all of the knowledge and tools I have. This mindset has been invaluable when it comes to having more confidence at work. I’ve taken more initiative than ever before since working from home. That sort of ownership is really powerful when you’re answering to someone else.

When you only have to answer to yourself, however, it’s a completely different story.

As many of you know, since I’ve known him, I’ve relied on my older and wiser ex/bestie/blog editor Josh for guidance in life. Ever since we were dating, he has always helped to build me up when I was feeling down, validate me when I was worried I was making a poor decision, and gently guide me when I actually was. In fact, my previous therapist called Josh my “surrogate therapist” because of how much I rely on him and ask for his advice.

With COVID and everything else going on in the world, Josh had to step back a bit, and I’ve really had to start taking responsibility for myself, which is absolutely terrifying. I finally had to face my lack of confidence and what was causing it. I couldn’t have Josh’s voice in my head cheering me on and guiding me for every little thing — the voice had to become my own.

I brought this up during one of my life coach classes, where I played the role of “client” and another coach in training did a coaching session with me in front of the class. I talked about how much I struggled with being self-assured and how I have spent the last year or so working on my confidence.

“My confidence has definitely improved at work, because I’ve realized that I’m good at my job, but I just can’t get it right all of the time. I’ve had to learn that it’s okay to get it like, 98% right.”

“Do you think you could apply that to the rest of your life? Understand that it’s okay to get some things wrong?”

…why hadn’t I thought of that?

As someone who is very self-aware, I’m always caught off-guard when someone points something out to me that I didn’t know about myself. I sat on the phone silently for a bit, contemplating this idea that seemed so obvious to me that I couldn’t believe I hadn’t thought of it.

Which made me feel super bad for the person playing the “coach,” by the way. It’s always easier to coach when the client is talkative, but I was so dumbfounded that I couldn’t give her anything to go off of. I hope that she took this as the compliment it was meant to be, rather than the awkward pain in the butt it actually was…

I was at a crossroads and worried about making the wrong decisions for the next steps in my life, but I couldn’t remain so paralyzed that I would get things wrong that I just did nothing! There’s nothing wrong with making an informed decision. Hell, “informed” is probably the best kind of decision to make! However, you’ll never know how something will turn out until you try it. There’s no guarantee that I will get everything right in my life, and only doing predictable things that I know will go right is no way to live.

Now, I’m in a job where it’s almost 100% learning new things. Every week comes with a new experience and lesson. While I love learning new things and having days that are vastly different from each other, being in the middle of a depressive episode makes me crave something rote, simple, and routine. Thinking causes me a lot of pain, so I’d rather do tasks that don’t require me to think! My creative position involves digging deep and coming up with new concepts constantly, which is amazing on a good day, intimidating on an okay day, and downright exhausting on a bad day.

I was telling one of my coworkers about the mental struggles I had been dealing with and how much I craved simplicity.

“That’s because of the perfectionism. I deal with that, too. We immediately want to shy away from new things because we aren’t good at them immediately. You know what you need to do? Get a bunch of crayons and draw on a large piece of paper on the floor. Don’t try to draw anything — just mess around.”

I’m looking forward to taking her advice sometime soon. Drawing random shapes for the sake of creating. Dancing badly. Singing all the wrong notes. Not everything you do has to be perfection.

Some things can just be…fun! 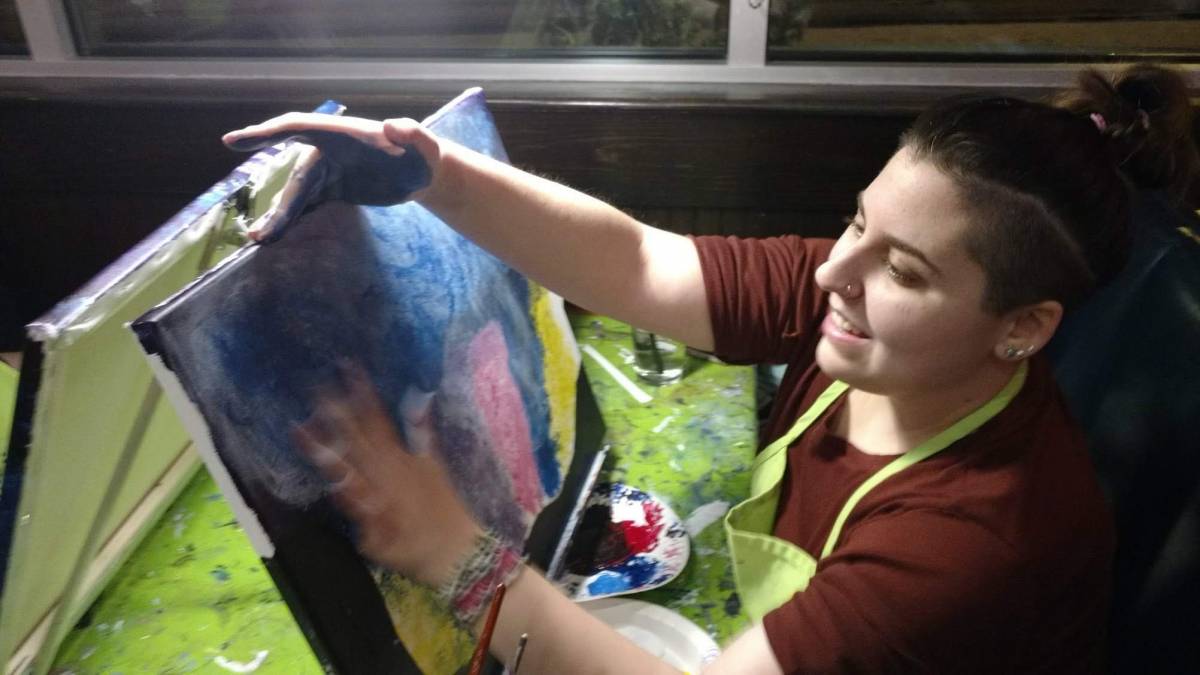 Get messy! Create something for fun -- it doesn't have to be perfect!

When I was younger, getting a 98% on anything meant that two points were left unaccounted for. A 98% meant that something wasn’t right. But I think it’s time I become okay with the 98%. It’s okay to mess up. It’s okay to be 98% Renata.

Originally posted on my personal blog at: http://buffalosauceeverywhere.com/2021/06/30/98-percent-renata/