A Look into the Palladium Pilot

Last Thursday was a very special day for the theatre industry.

After months of being neglected by the government, and after months of hard work from industry top dogs like Cameron Mackintosh and Andrew Lloyd Webber, the government had finally selected The London Palladium to conduct a pilot performance, with a wide range of safety measures and most importantly, a socially distanced audience.

This pilot was planned to help influence and inform the plans for getting indoor performance venues back up and running safely with full audiences.

Demonstrating that we can get audiences safely back in our theatres, without social distancing, is the main priority for our industry, hosting an indoor live performance for the first time in months is a major step in that direction.

For this special performance Andrew Lloyd Webber (owner of The London Palladium) invited soul and West End superstar Beverley Knight to hold a one-off concert and gave 647 tickets away to willing audience members, or “guinea pigs” if  you will.

After A LOT of deliberation, I am incredibly proud to say that I was one of those guinea pigs, and I had the most wonderful of afternoons.

There are no words to explain just how badly our industry is hurting. Every week we seem to receive another blow, but yesterday was a success and a step in the right direction.

While we are all desperate to get back into our beloved venues, we all know this must be done safely. This was of course never going to be an easy task, but one thing is clear, Lloyd Webber and his team have stepped up and have taken the challenge by the horns.

In this post I will be sharing the safety measures implemented at the Palladium, and my experience of attending a socially distanced performance.

Entrance:– QueuingOne thing you will notice on your ticket is that each section of the theatre has specific entrance times. This in theory is to prevent the gathering of people outside of the venue and to reduce the number of bodies in the queue at any one time.In theory this is a fantastic idea, but if I am going to be incredibly picky, I felt the queues weren’t extremely clear. For example, without asking I had no idea where my queue was or if I was in the right location. After around 15 minutes a very lovely member of staff took me to the correct entrance and that was that.

– Track and TraceWhile in the queue a member of staff was continuously walking up and down reminding us to keep 2 meters apart, making friendly conversation and presenting us with The Palladium’s Track and Trace board.Before entering the venue we each had to scan the QRC code on the board, fill in your name, contact number and the date and time of the performance you are attending.Incredibly easy and hassle free. Not much more to say on this.

– Now it’s time to enter the building.As is the norm with theatre trips now-a-days, upon entry you open your bag, and a member of staff is waiting behind a protective screen to check the contents contactlessly.

Next up your ticket is scanned, again contactlessly, and you are then directed to stand on a spot on the floor. As you stand here a thermal imaging camera scans your person and takes your temperature. If you’re a healthy temperature you can carry on into the building. Only one person can be assessed at any one time so patience is needed while waiting.This process was incredibly quick, so quick I wasn’t able to snap any pictures to help document and wasn’t able to ask what would happen if your temperature was too high.

– You may have seen on a recent BBC news feature that The Palladium has imported an anti-viral fogging machine from Korea. This machine sprays you as you walk through and kill 99.9999% of viruses and bacteria. The machine is not compulsory and it suggested to avoid if you suffer from eczema, asthma or wear contact lenses.Considering how anxious I was about this event, I was incredibly excited to walk through this machine and be fogged. However The Palladium currently only has one and that was downstairs in the foyer leading to the stalls (which it seems was largely reserved for VIPs and press). 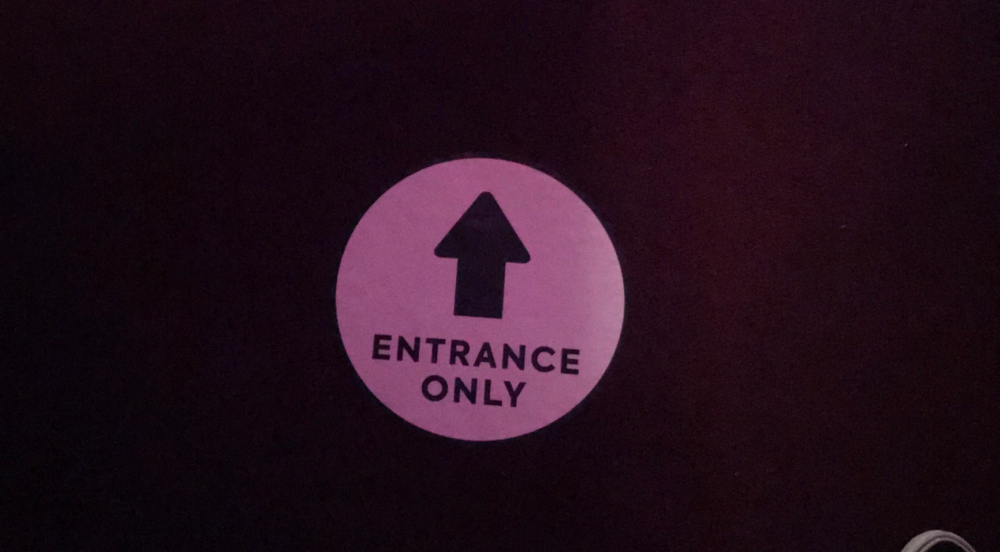 Inside the Building:– From the moment you enter the building face coverings are mandatory, as is the case with all public transports and shops from today. The only time you can remove is when eating or drinking. Please don’t take the mick. This is a courtesy, not a loophole.There’s not much to say on this. It’s mandatory. It keeps us safe. Put your bloomin mask on.

As someone who struggles in the mask I’ll be honest. At the start it was difficult, especially after walking up the 3 flights of stairs to the Grand Circle, but as soon as the show started I forgot all about it. The longer you wear it the more you’ll get used to it.

– Once inside the building there is a very clear and very simple one way system with directions on the floor and instructions from staff as you walk in.Very easy to follow, very necessary considering how tight some theatres can be, but can feel a little tedious when trying to get to your seat.

– Just a very quick note on the women’s bathroom.All stalls were available to use and out of three sinks, the middle was unavailable.The air dryers had been switched off and were replaced with large and sturdy paper towels with a sanitising station outside.I’m sorry I cannot comment on the men’s bathrooms!

– The first two rows of each seating section was completely empty and were used as walk-through aisles to reach your seat.A brilliant idea, but again can feel tedious when you’re the first to reach your aisle. But hey! These rules are in place to keep us safe so I’m not grumbling.

– As a theatre which can normally seat up to 2286 audience members, it is heart-breaking seeing it reduced to a mere 647. The out of bounds seats were very clearly marked and one small bonus is the extra room you get by your feet.Also, I actually got to use both of my arm rests! I never usually get to use any! Small victories.

However I did have one small concern about the seats. Although nobody was sat near you in your row, the seats directly in front and behind were filled with patrons. I guess they must have been 1+ meters away, but I can’t help but wonder if there was a better way of spacing people out.

But then again, this whole endeavour yesterday was to show that theatres cannot and should not be socially distanced so my concerns are irrelevant.

– Once in your seat a member of staff will approach you and ask if you would like to order and drinks, snacks or ice creams. The transaction is contactless and the order will be brought to your seat.

– Emz on Instagram asked “What happens if somebody in the middle of a row needs the bathroom during?”This is a brilliant question and to be honest, I don’t actually know. My guess would be that as there are no more than 6 people in a row, we would all need to move to the aisle to allow them through. But this is a perfect example of how difficult it is to socially distance in a theatre. 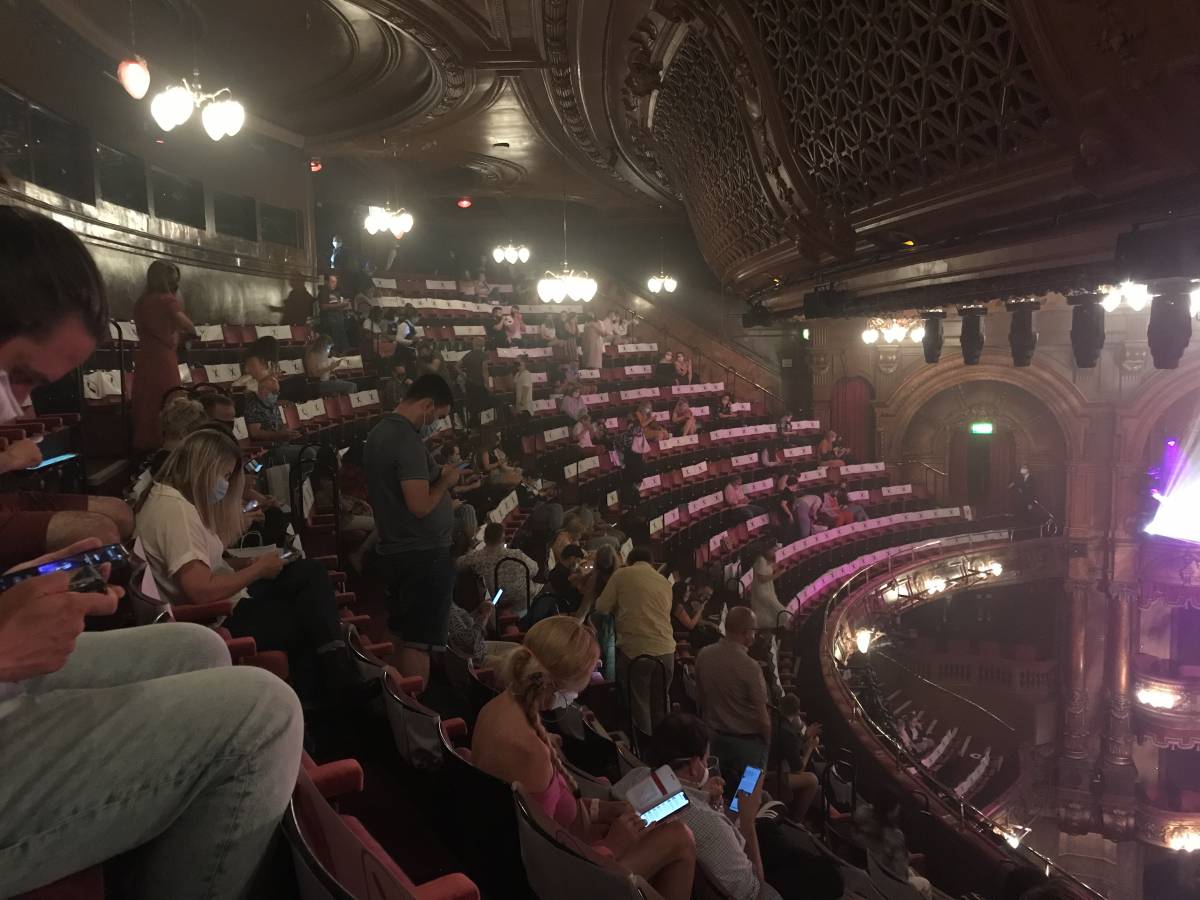 Show Time:Unsurprisingly the event was kicked off with a speech from our fearless leader, Andrew Lloyd Webber. Andrew was met with an astounding applause from the audience and I just wanted to share a few facts he explained to us:

– The measures implemented in the Palladium are not just in place to get The Palladium open. They are to help work towards opening all theatres across the country

– Yesterday The Palladium was fogged. The chemical it was fogged with kills viruses in the air and will continue to do so for roughly 4 weeks. Andrew and his team have proposed that the theatres would be fogged every fortnight

– The air in The Palladium has been extracted from above the building, filtered, and then pumped in to the auditorium. This means the quality of air in the theatre is actually safer than the air outside on Oxford Street (not hard, we know!)

– It is financially impossible for a theatre to run with social distancing as a musical needs to run at at least 70% capacity just to break even, let alone repay its investments

– Michael Harrison (One of the leading Pantomime producers in the country) has stated that he needs to know whether Pantomimes can reopen without social distancing by 31st of August. If  these Pantomimes do not go ahead this will have a detrimental effect on smaller regional theatres across the country

– Andrew finished with a simple plea to Boris:

“Give us a date mate” 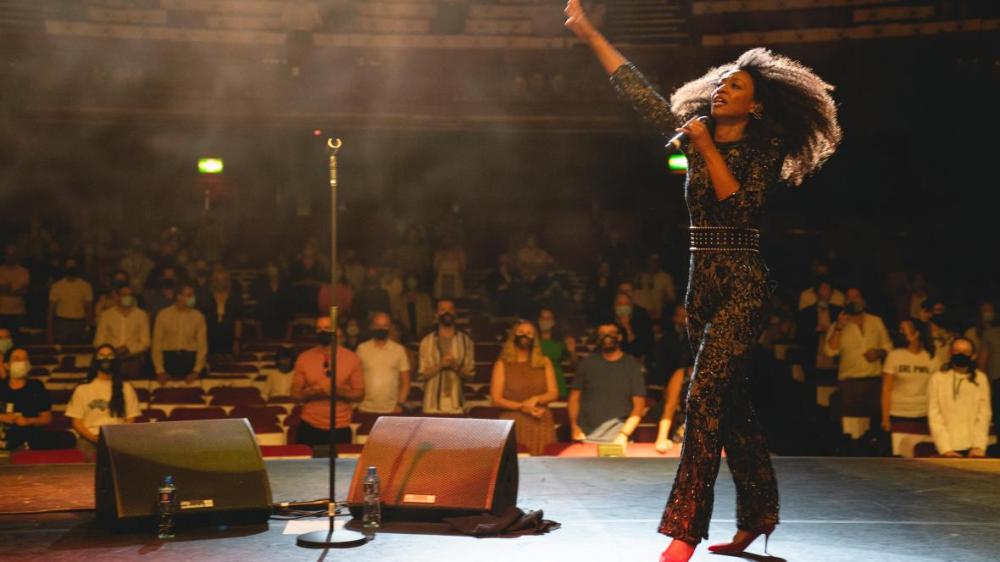 Onto Beverly:– Safety wise – Beverley was stood around 2ft from the edge of the stage, her whole band were socially distanced and she told us she wasn’t meant to encourage the audience to sing

– For a socially distanced concert, the afternoon was fun, it was freeing and it was oh so needed. Beverly reminded us of the power of live entertainment and proved once and for all just why this industry needs saving.

I have tried to cover as much as I possibly could, but if you feel I have missed anything or have any questions please do give me a Tweet, Instagram message or comment below. I’m always happy to answer a query or just have a chat!

Today may not have been perfect, but it was a step in the right direction. History was made, and hopefully we’ll soon see the benefits in theatres all across the country.

All images my own unless stated in the caption.